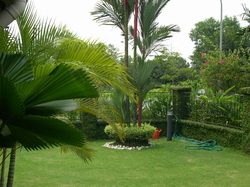 THE INTER-FAITH PROGRAM
The Inter-Faith Program has realized by the late Mayor Manny T. Sia's dream, that is, friendship in diverse faith, and has likewise proven that different religious sects can work together in partnership with the government for a common good. Created to implement the program, the Pilar Heritage and Tourism Council, has now thirteen religious sects as members represented by their respective church leaders. This Council now managed the Pilar Interfaith Memorial Park, located at barangay Sta. Fe and the Tourism program of the local government.

WHY PARAU FESTIVAL
TO SHOWCASE THE CULTURE AND HERITAGE OF PILAR
The Lucrative Manila Acapulco Galleon trade in the 1600's resulted to the establishment of one of the biggest and important shipyards in Bagatao Island, now Magallanes. But being as island, the Bagatao shipyard suffered from raids and was destroyed by Moro pirates. The Spanish authorities and shipyard owners were forced to look for a safer site for their ship building activities. Pilar was as alternative. Panlatuan Bay, Pilar, Sorsogon had been a shipyard after the galleon trade ended in 1650. The evolution in Sorsogon was ignited when the workers of Panlatuan Shipyard were abused and exploited by the Spanish masters. They burned the town of Pilar, visite of Macalaya and the town of Magallanes. The killing of shipyard administrator, Don Ramon Gonzales on August 15, 1898 was also one of the incidents of the revolution. The Spanish authorities retaliated by massacring more or less 800 inhabitants including innocent children who were coming from the church after attending the mass. The patience, perseverance and ingenuity of Pilareńo ancestors being shipbuilder are now shown in the PARAU FLOAT COMPETITION and how they victoriously overcome all the sufferings and pain from the cruelty of Spaniards is now exhibited through STREET DANCING.